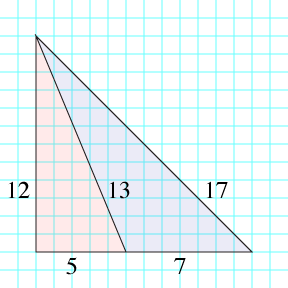 And of course the figure above isn't accurate: in the drawing, the longest edge has length 16.97 instead of exactly 17.

I'm not sure whether this is an isolated oddity or whether there are more pairs of integer Pythagorean and automedian triangles whose angles almost match up like these two do.

It's not an isolated oddity; the automedian triangle off an 8-15-17 triangle is a 7-17-22, where the longest edge in the corresponding diagram is about 21.2. So, not quite as close, but not horribly off either.

I assume you can have an infinite number of integer right triangles that are arbitrarily close to a given side ratio (since Wikipedia gives examples for \( 1:2:\sqrt{5} \) and \( 1:1:\sqrt{2} \) cases), so I think the answer to your question is that this is indeed not an isolated oddity at all.

Yes, you can find integer right triangles that are arbitrarily close in shape to any given right triangle. But I think that it may not be possible to find infinitely many examples (or even, any other examples) where the squared length of the true isosceles right triangle (here 288) and the squared length of the longest side of the blue triangle (here 289) differ only by one. I tried looking at the next few pairs of Pell numbers since those are the ones that give rise to the most accurate integer approximations to \( \sqrt{2} \) but none of the pairs after (5,12) had the property of belonging to a Pythagorean triple.


Requiring that the squares of the sides differ by less than one does seem difficult, but that seems irrelevant to why the illustration "works", which is that the difference is very small relative to the length of the longest side.

The difference here slightly larger in absolute terms (0.089) but much lower relative to the length of the hypotenuse.