« Kerning The dilation center of a triangle »

You remember that genus-four surface embedding of the Nauru graph (the unique 3-regular 24-vertex symmetric graph) that I couldn't figure out how to model in SketchUp? This weekend I tried modeling it again. This time I wrote a Python program to output a POVray program to generate the model. Here it is: 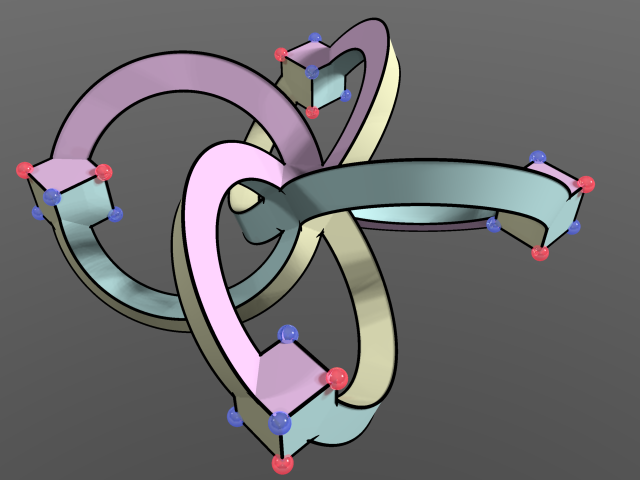 The flat surface texture, the dark outline of the graph edges, and the rough points where the edges bend around sharp corners and don't quite meet correctly at the corners all add up to a vaguely cartoony appearance, despite this being a high-quality antialiased raytrace, but I kind of like it that way.

On a vaguely-related note, I found my long-lost discrepancy-for-supersampling-for-antialiasing coauthor Don Mitchell's new web page. Don worked for Microsoft until around 1999, when I lost track of him. Nowadays he runs two smaller graphics companies in the Seattle area.


That is the coolest looking PovRay output I have ever seen.


Nice job! Can you turn it into a 3D thing which the user can rotate by dragging with the mouse? --Gabriel


I did that some years ago with some other povray objects, rendering them from multiple directions and putting them together into quicktime VR objects. I don't think QTVR really caught on, though, so I don't know how useful it would be to take that route again, and I don't even know if I can still run the programs I used to put them together. There must be some way to create rotatable things like that in Flash or Java nowadays but I don't know much about that.