« Recent reading roundup Get the lead out »

Despite Muthu's kind words, I'm currently being very frustrated over my inability to produce a legible image of a 3d model I have in mind.

It's supposed to look something like the image below, which I mocked up in SketchUp (a program that seems very powerful but that I don't know how to use very well): a quincunx of cubes, with circular beams connecting the inner cube to each outer cube. 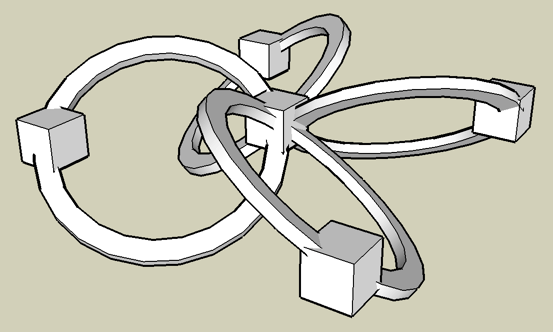 The result, if you haven't guessed, is a symmetric geometric realization of the genus-four surface embedding of the Nauru graph that I discussed the other day; the graph vertices are the remaining cube vertices on the outer cubes, not passed through by any beam, while the graph edges follow the sharp edges of the cubes and beams. My 3d modeling skills in this or any other program just aren't sufficient to the task, though, and it looks nearly as sloppy as this when I try to make a 2d sketch of the 3d model instead. It's frustrating.