The second preprint from my CCCG papers is now online. It is “Reflections in an octagonal mirror maze”, arXiv:2206.11413. The title is quite literal: suppose you find yourself in a mirror maze, where the mirrors are aligned with the sides of an octagon, and have integer coordinates (meaning that, on a floorplan of the maze, the mirrors become line segments between points of an integer grid). What would you see if you looked in any given direction? It might be many reflections eventually leading to the back of your own head, to the exit, or some other non-reflective part of the maze. The example below, from the Museum of Science & Industry in Chicago, is hexagonal rather than octagonal, but otherwise has much the same effect: 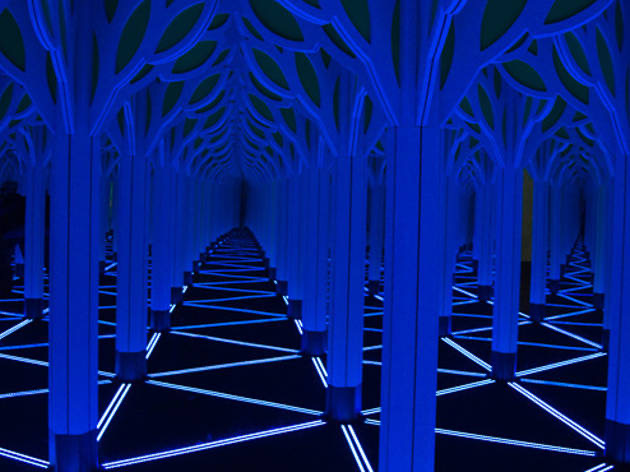 In this example, it looks like you might be seeing something else, not the exit or your own head: a corridor of infinitely many reflections. But when looking in a direction of rational slope, and without tricks involving one-way mirrors (my guess at what’s happening in the photo), that’s not actually possible. Rationality implies that there are only finitely many possible points where your view could hit a mirror: in the photo above, all the reflections down the corridor look like they are actually on the center lines of the mirrors. Because there are only finitely many of these points (in reality, if not in what you see), such a view would have to eventually repeat, in a finite cycle. And finite cycles like that are definitely possible, but you can’t see them, because putting your eye onto them blocks the view.

Although the problem is simple to state, the solution uses sophisticated methods from computational topology. It’s an application of an idea from an earlier post, originally by Mark Bell, and included in an update to my earlier preprint “The Complexity of Iterated Reversible Computation”. This idea concerns iterated integer interval exchange transformations: if you have a function on an interval of integers that acts by permuting subintervals, then how easy is it to compute the result of applying the same function many times? As Bell observed, this computation could be transformed into an equivalent problems of tracing normal curves on a topological surface, which had been solved in earlier work by Erickson and Nayyeri. The new paper generalizes these integer transformations to partial functions, extends the same method to compute iterated values of these partial functions, and shows that these partial functions can be used to model the way the mirrors in a mirror maze permute sightlines.