A lot of topology is finding ways to prove things that are really obvious but where explaining why they’re obvious can be difficult. So I want to do this for a discrete analogue of ropelength, the length of the shortest lattice representation, for the Borromean rings. You can find several pretty lattice (and non-lattice) representations of the Borromean rings in a paper by Verhoeff & Verhoeff, “Three families of mitered Borromean ring sculptures” [Bridges, 2015]; the one in the middle of their figure 2, thinned down to use only lattice edges and not thick solid components, is the one I have in mind. It is formed by three \(2\times 4\) rectangles, shown below next to Jessen’s icosahedron which has the same vertex coordinates. (You can do the same thing with a regular icosahedron but then you get non-lattice golden rectangles.)

Each of the three rectangles has perimeter \(12\), so the total length of the whole link is \(36\). Why should this be the minimum possible? One could plausibly run a brute force search over all small-enough realizations, but this would be tedious and some effort would be needed to prune the search enough to get it to run at all. Instead, I found an argument based on the lengths of the individual components of the link, allowing me to analyze them (mostly) separately.

If you travel in some consistent direction around a cycle in a 3d lattice, every step in one direction along a coordinate axis must be cancelled by a step in the opposite direction elsewhere along the ring. So if a lattice cycle has length \(\ell\), there must be \(\ell/2\) pairs of opposite steps, partitioned somehow among the three dimensions. If the bounding box of the cycle has size \(a\times b\times c\), then we must have \(a+b+c\le\ell/2\), and we can classify the possible shapes of lattice cycles of length \(\ell\) by the possible shapes of their bounding boxes. This gives us the following cases:

That leaves only one problematic case, the \(3\times 2\times 0\) rectangle, of perimeter \(10\), which is shorter than the rectangles of the optimal representation but can nevertheless be crossed by two other lattice paths. In fact, this rectangle can be used as a component in a representation of the Borromean rings. It is even possible to use two of them! (I’ll leave this as an exercise.) So we need some other argument to prove that, when we use one or two of these short rectangles, we have to make up for it elsewhere by making something else extra-long.

If a \(3\times 2\times 0\) rectangle is a component of the Borromean rings, it must be twice by one of the other components, because if its two crossings were from different components it would have nonzero linking number with both of them, different from what happens in the Borromean rings. And the crossings must happen at the two interior lattice points of the rectangle, through paths that (to avoid each other and the boundary of the rectangle) must pass straight across the rectangle, at least for one unit on each side. The component that crosses the rectangle in this way consists of two loops connecting the pairs of ends of these two straight paths; any other connection pattern would lead to linking number \(2\), not zero. We can think of these two loops as being separate cycles, shortcut by the lattice edges between the endpoints of the two straight paths. And any disk that spans either of these two loops must itself be crossed by another component of the Borromean rings, because if one of the loops had an uncrossed spanning disk then we could wrap a spanning disk for the rectangle around it (like a glove around a hand) and create an uncrossed spanning disk for the rectangle as well. 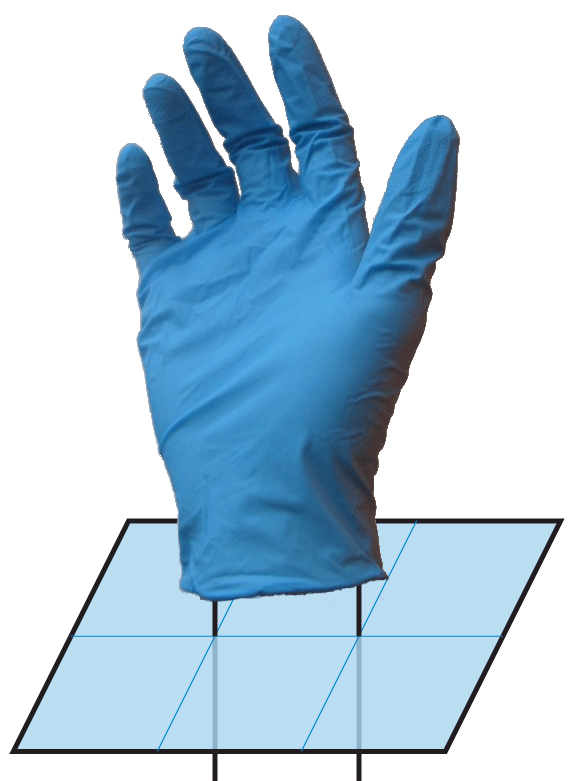 Researching all this led me to an interesting paper by Dai, Ernst, Por, and Ziegler, “The ropelengths of knots are almost linear in terms of their crossing numbers” [J. Knot Theory and its Ramifications, 2019]. Ropelength is the minimum length of a 3d representation that can be thickened to a radius-1 tube without self-intersections. (Some sources use diameter in place of radius; this changes the numeric values by a factor of two but does not change the optimizing representations.) Doubling the dimensions of a lattice representation gives you such a representation, and on the other hand one can find short lattice representations by following the thickened tubes of a ropelength representation, so ropelength and lattice length are within constant factors of each other. Dai et al. use this to show that knots that can be drawn in the plane with few crossings also have small ropelength. It doesn’t work to use the plane embedding directly, adding a third coordinate to handle the crossings, because some planar graphs (like the nested triangles graph) have nonlinear total edge length in any planar lattice drawing. Instead, Dai et al show how to crumple up a planar drawing of any degree-four planar graph into a 3d integer lattice embedding of the graph, with near-linear total edge length, so that the faces of the drawing can also be embedded as disks that are not crossed by each other or the graph edges. One can then modify the lifted drawing to turn the degree-four vertices into crossings in the lifted topologically-planar surface formed by these faces, giving a grid representation of the original knot with near-linear total length.

The ropelength of the Borromean rings has also been the subject of some study. Doubling the grid rectangles and rounding off their corners produces three stadia with total perimeter \(12\pi+24\approx 61.7\). The same argument as above shows that each curve must be at least long enough for all its spanning disks to be crossable by two disjoint radius-1 tubes. Intuitively the smallest curve that can surround two tubes is a smaller stadium corresponding to the \(2\times 3\) rectangle, with length \(4\pi+4\). If so, this would give a lower bound of \(12\pi+12\approx 49.7\) for the total ropelength of the Borromean rings. The conjectured-optimal configuration, used for the logo of the International Mathematical Union, uses three copies of a complicated two-lobed planar curve in roughly the same positions as the three rectangles or stadia; it is described carefully by Cantarella, Fu, Kusner, Sullivan, and Wrinkle, “Criticality for the Gehring link problem” [Geometry & Topology 2006] (section 10), and has length \(\approx 58.006\). The intuition that the \(2\times 3\) stadium is the shortest curve that can surround two others also appears to be stated as proven in this paper, in section 7.1. But they state that the best lower bound for the Borromean ropelength is \(12\pi\) so maybe the \(12\pi+12\) argument above is new?

Update, February 17: In email, John Sullivan pointed me to a paper by Uberti, Janse van Rensburg, Orlandinit, Tesi, and Whittington, “Minimal links in the cubic lattice” [Topology and Geometry in Polymer Science, 1998; see table 2, p. 97], which does the tedious computer search and comes up with the same result, that the shortest length for a lattice representation of the Borromean rings is 36. (I had searched for papers on lattice representations of the Borromean rings but didn’t find this one, probably failing because it identifies the Borromean rings only by the Alexander–Briggs notation \(6_2^3\), which is hard to search for.) John also tells me that the proof of ropelength-minimality of the \(2\times 3\) stadium is only for links in which it is linked with two other components, different enough from the situation here in which every spanning disk is crossed twice that the same proof doesn’t apply. So the question of whether this stadium really is the ropelength minimizer for components satisfying this crossed-twice condition seems to fall into the category of obvious topological facts that are difficult to prove, rather than being already known.