A penny graph (the topic of today's new Wikipedia article) is what you get from pennies by shoving them together on a tabletop, keeping them only one layer thick, and looking at which pairs of pennies are touching each other. In a 2009 paper, Konrad Swanepoel suggested that, when there are no three mutually-touching pennies, the number of adjacencies should be at most \( 2n - 2\sqrt{n} \). I don't know how to prove that, and as far as I know the problem remains open. But here's an argument for why the number of edges should be strictly less than \( 2n - 4 \), the upper bound given by Swanepoel.

The basic idea is that, in any set of triangle-free pennies, some penny is touched at most twice. Or, in graph theoretic terms, a triangle-free penny graph must be 2-degenerate. For, suppose to the contrary that all pennies had at least three neighbors, and consider the outer face of the planar graph formed by the pennies (marked by the blue polyline below). For each penny on the outer face, draw a line through its center and the center of a neighboring penny that is not one of its two outer-face neighbors (the red lines in the figure). 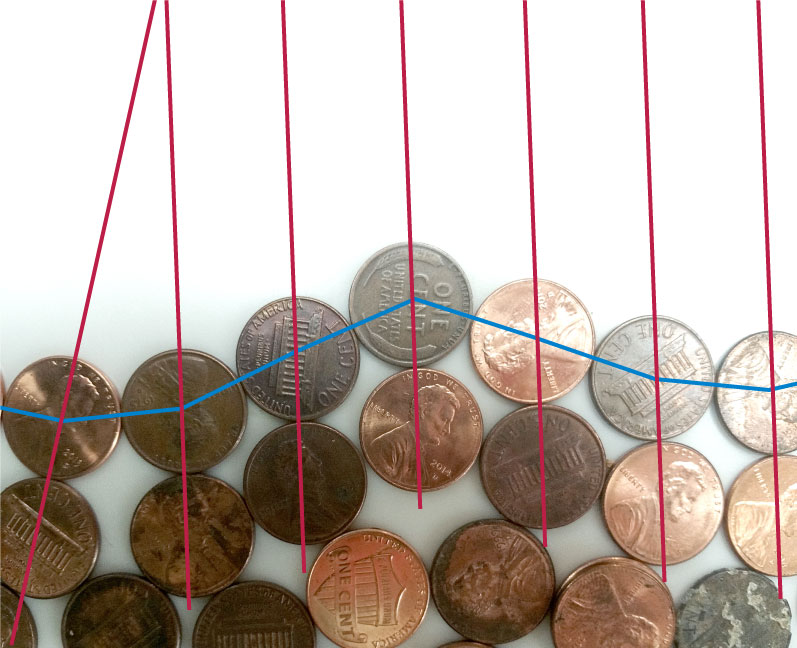 As you walk around the outer face (clockwise, say) these red lines would always have to point consistently inwards and outwards, so they would have to turn with you, eventually making a complete circuit in the clockwise direction. But they can only turn counterclockwise! If you follow an outer face edge whose adjacent inner face is a quadrilateral, the red lines stay parallel (as they do in most of the picture) and otherwise they turn the wrong way. The impossibility of the red lines making a complete clockwise turn while only turning counterclockwise at each step shows that our assumption, that all pennies have three neighbors, cannot be correct. Therefore, there is a penny on the outer face with at most two neighbors.