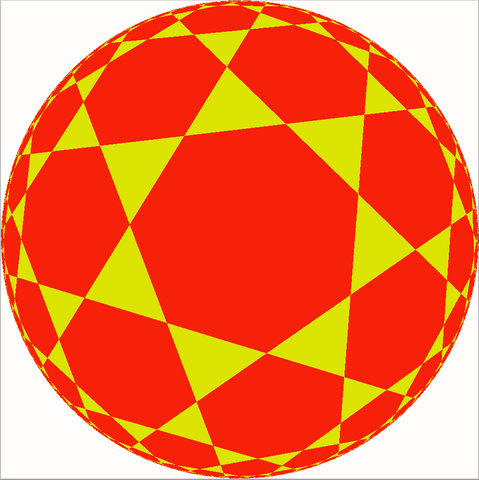 One use for these models is in information visualization, to provide a fisheye view of a drawing in the hyperbolic plane that provides "focus+context": focus on some specific feature in the drawing, and context of all the rest of the drawing, compressed into the outer parts of the disk. Another is as an aid to mathematical intuition: hyperbolic lines may be hard to visualize and understand, but chords of a circle are much more familiar, and this model shows that (in terms of the combinatorial patterns they can perform, if not their distances and angles) they are really the same thing.

But did you know that you can get an analogous fisheye view of the Euclidean plane, by another pair of models that map Euclidean lines to natural families of curves in a disk?

The two Euclidean disk models are formed in the same way, by composing two of these transformations. Mapping the plane to the hemisphere by an inverse central projection, and then mapping the hemisphere back to the plane by a perpendicular projection, produces a model of the Euclidean plane inside a disk, with Euclidean lines represented as semi-ellipses within the disk (having the disk radius as their semimajor axis):

In both models, diameter segments also count as degenerate ellipses or arcs, and model Euclidean lines through the origin. One important difference from the hyperbolic case is that neither of these models is conformal: the angles that curves cross in the models aren't the same as the angles that they form in the Euclidean plane. But they can still be used to provide focus+context views of the whole plane. And it follows from the existence of these models that the combinatorial patterns that can be made by lines in the Euclidean plane, by concentric semiellipses with the same semimajor axis, or by circular arcs through diametrally opposite points of a circle, are all the same.