In my previous post here I remarked that the hypercubes are the face lattices of simplexes. I also drew the face lattice of a square, which you might have noticed forms a planar graph, the graph of another polyhedron (the tetragonal trapezohedron, an octahedron with eight kite-shaped faces). This turns out not to be a coincidence. For every many (see comments) \( d \)-dimensional convex polytopes \( P \), the covering graph of its face lattice is the graph of a \( (d+1) \)-dimensional convex polytope, which for lack of a better name I'll call the face incidence polytope, or incidence polytope for short (although that shorter phrase does already have a different meaning).

The construction of the incidence polytope is very simple. Given a polytope \( P \), place \( P \) so that the origin of its space is interior to it, and let \( Q \) be its polar polytope. Place \( P \) and \( Q \) on two parallel \( d \)-dimensional hyperplanes in \( (d+1) \)-dimensional space. Translation or scaling of these two planes doesn't affect the combinatorial structure of the result, but it is convenient to choose how to place these two hyperplanes so that they are perpendicular to the line connecting their origins; neither polytope should be rotated. Next, construct the convex hull of the union of \( P \) and its parallel polar. Then, the incidence polytope is the polar polytope to this convex hull.

For instance, if you start with a regular polygon with \( n \) sides, then its polar polygon is also regular with \( n \) sides, but rotated by an angle of \( \pi/n \) with respect to the original polygon, so that the vertices of the two polygons interleave each other. Placing these two polygons on two parallel planes and constructing their hull gives an antiprism, and then forming the polar polytope of this antiprism gives us a trapezohedron, like the one I drew last time.

Why does this work? (When it works at all; see comments.) I think the simplest explanation involves dropping a dimension, to a \( (d-1) \)-dimensional (hyper)surface in \( d \)-dimensional space, the image of the Gauss map. This map transforms points on the surface of \( P \) to their (set of) unit normal vectors. The set of all unit vectors is a sphere, and the image of the Gauss map is a subdivision of the sphere according to which point or points of \( P \) are most extreme in a given direction. For instance, the Gauss map for a cube subdivides the sphere into eight spherical triangles. Each triangle corresponds to one of the eight vertices of the cube. The unit vectors in this triangle represent directions in which that cube vertex is the most extreme: its dot product with the vector is bigger than the dot products involving the other seven vertices. 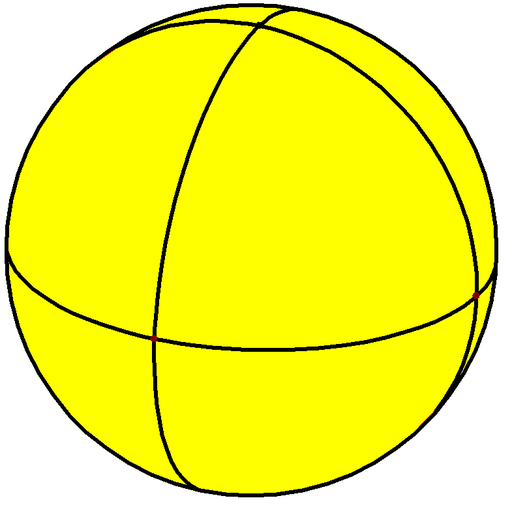 The edges of this subdivision represent directions in which there are two equally extreme points (the endpoints of an edge of the cube) and the vertices of the subdivision represent directions in which there are four equally extreme points (the vertices of one of the cube's faces). In this way, the features of the Gauss map correspond to the features of the cube, but with the dimensions reversed. If instead we take the Gauss map of the polar of a cube (an octahedron), both the polar and Gauss map operations reverse dimensions and we get the cube itself back, but a spherical cube rather than a polyhedral one. And if we overlay the Gauss maps for the cube and its polar, we get something like this: 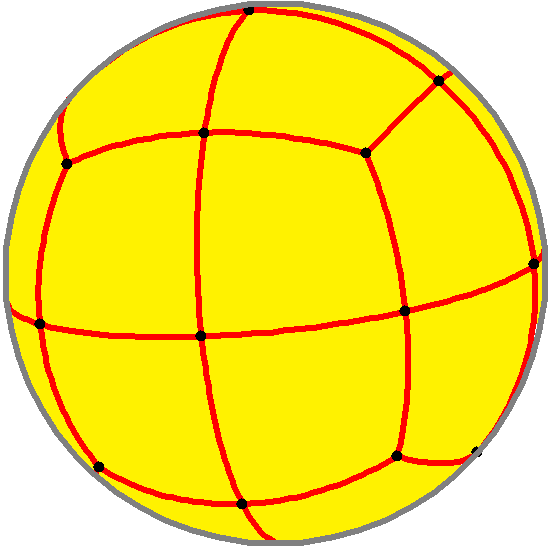 In my previous post we saw that the faces of the hypercube are in one-to-one correspondence with the sets of binary strings that can be described by placing wildcards in some positions of the string, and fixing other positions to 0 and 1. In order to make this correspondence work, we needed to include one more set of binary strings (the empty set) that could not be described by wildcards in this way, to correspond to the empty \( (-1) \)-dimensional face of the hypercube. The incidence polytope construction shows that these wildcard strings (together with \( \emptyset \)) are also in one-to-one correspondence with the vertices of a polytope, the incidence polytope of a hypercube. The edges of the incidence polytope represent the ways in which you could turn a 0 or 1 into a wildcard character or vice versa.

Another polytope whose faces are meaningful is the permutohedron, the convex hull of the permutations of the vector \( (1, 2, 3, \dots, d) \). It's a \( (d-1) \)-dimensional polytope, because these points all lie in a hyperplane (their sum of coordinates is a triangular number). Its nonempty faces correspond to weak orderings, orderings that like the outcome of a horse race are transitive (if \( x \) beats \( y \) and \( y \) beats \( z \) then \( x \) beats \( z \)) but may have equivalence classes of tied elements: the vertices of a face are the permutations that can be formed from the ordering by breaking all ties in a consistent way. Here for instance are the 13 weak orderings of a three-element set: 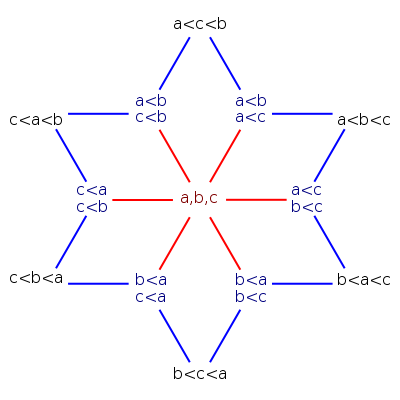 The 3-element permutohedron is a regular hexagon. The outer six vertices of the diagram above correspond to the hexagon's vertices, the middle six vertices correspond to the hexagon's edges, and the central vertex corresponds to the whole hexagon. So we have here almost the entire face lattice of the hexagon, but we're missing one vertex, corresponding to the empty set. If we add back this one vertex (adjacent to the six outer vertices of the diagram) we get the graph of a polyhedron, the hexagonal trapezohedron, the incidence polyhedron of the hexagon. In the same way, if we take the incidence polytope of a permutohedron, we get a \( d \)-dimensional polytope whose vertices represent all the weak orderings of a \( d \)-element set (with one extra vertex representing the empty set of permutations, or an inconsistent weak ordering). The edges of the incidence polytope represent ways of breaking a tie by splitting one equivalence class into two smaller equivalence classes.

None: 2016-01-22T09:22:35Z
In dimensions from 4 on, not every polytope has an antiprism (at least, that's what Dobbins claims, see http://arxiv.org/abs/1307.0071). The problem seems to be the overlay of the two Gauss maps, which for some examples cannot be drawn so nicely interleaved.
11011110: 2016-01-22T17:43:40Z
Hmm, interesting. I have to admit I was assuming polarity would automatically make them nicely interleaved. So maybe this only works consistently to make 4d face incidence polytopes for 3d polyhedra. Although I guess there's reason to hope that when things are symmetric enough then it still works in higher dimensions. Reading the paper you link, I see that the definition of a face incidence polytope and the question of its existence can be traced back to Bernt Lindström. Problem p73. Aequations mathematicae, 6:113, 1971, so this is also helpful.