For the past few years I've been carrying around a small notebook to jot down notes from talks, research ideas, expenses, etc. (I guess I could do it on my phone but I prefer pen and paper.) I like writing with fountain pens, but don't care to carry around an expensive one: I don't feel I need to impress people with how much I spend on accessories, and I don't want to worry about losing it. I had been using disposable Pilot Varsity pens, but occasionally (especially if I took them on airplanes) I would end up with ink all over my fingers, so I recently tried switching to an inexpensive refillable pen, the Lamy Safari (fine point, with refilling attachment and Noodler's forest green ink). Below is a comparison of how my notes look with the two pens: 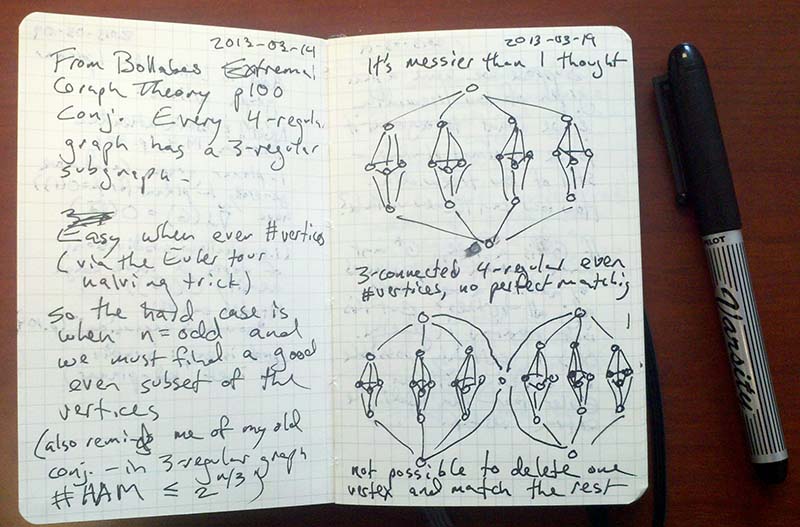 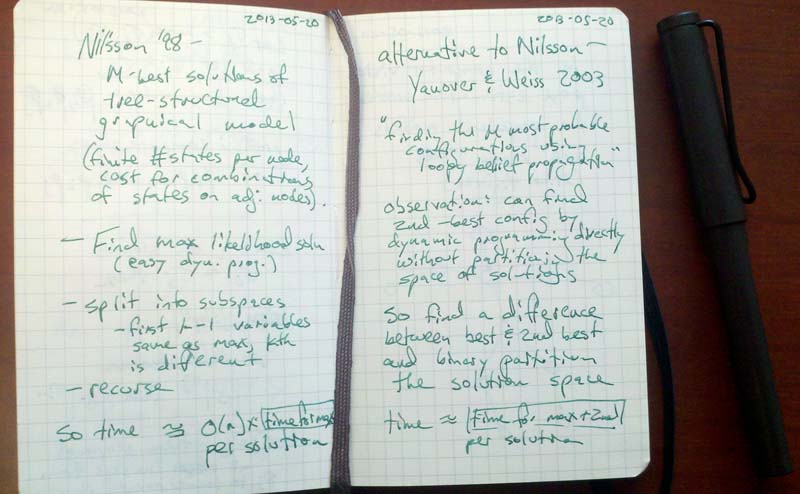 The Lamy feels less scratchy than the Pilots, but I didn't really mind the scratchiness. The more important differences in the way it feels to me are that the Lamy's bigger size fits my hand better and lets me hold my fingers a little farther away from the tip (making inky fingers less likely), and its triangular cross-section gives me a more consistent orientation, so I find myself holding the pen the wrong way less often. The writing comes out less blotchy, with better control of the line weight, and I don't feel that I have to write as large to make it legible. There's also significantly less bleed-through on the Moleskine square-ruled paper I've been using, although it's still nonzero.

I still don't know if these pens are more reliable in the air, but on the whole I'd say this is a big step up in writing quality.

(Edit) - oh, I've never commented on livejournal. I'm not used to my openid gravatar not being automatically ported over. Having no portrait makes me feel less... legitimate or something. But I am!
11011110:
2013-05-22T05:46:59Z
Not worrying about chips and scratches is another good reason to go with an inexpensive one.