I should probably post something about WADS but I haven't had time to get my thoughts in order yet. In the meantime here's something completely different. (For actual posts about WADS, see Kevin Wortman's brief post and John Moeller's cruise photos.)

As I described here, a squaregraph can be described by a chord diagram, a circular sequence of 2k symbols for some integer k, in which each of the symbols 1, 2, ..., k appears twice. Not all of the k!! possible chord diagrams work, though: a chord diagram corresponds to a squaregraph if it avoids the pattern i...j...k...i...j...k and the graph it describes is biconnected if it can't be decomposed into two smaller contiguous subsequences, with each symbol appearing in only one of the two subsequences.

For instance, as Knuth writes, there are (up to isomorphism) 18 biconnected squaregraphs with five bounded faces: the twelve pentominoes and six additional graphs. 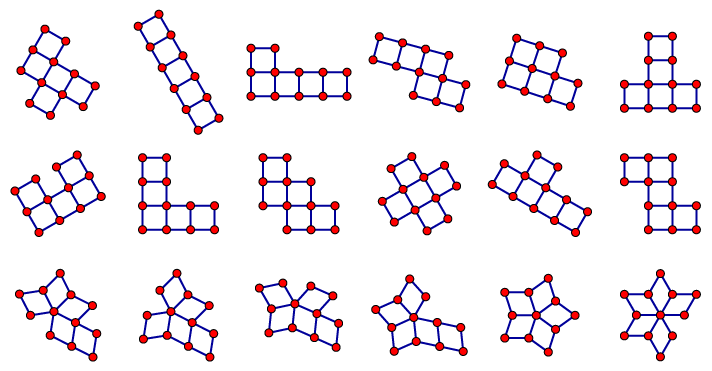 (Don't ask me why some of them came out tilted like that; it's an artifact of the implementation of my algorithm with Kevin for drawing squaregraphs with optimal angular resolution.)

The algorithms Knuth used to enumerate these things are pretty much just brute force searches, so there's probably plenty of room for more clever algorithms to push the sequences to greater numbers of terms.


I have even found a way to compile it:

It needs unittests and more.