I could say a lot about my own relation with Knuth's work: as a freshman in college in 1981 I was hired to help typeset a book in TeX (The Handbook of Artificial Intelligence), my first published paper was on graph drawing using TeX, and my thesis work concerned dynamic programs closely related to the line-breaking algorithms in TeX. But I thought it might be appropriate, instead, to do something a little more technical.

Knuth was the first to use the phrase “analysis of algorithms,” at the 1970 ICM in Nice. He popularized and extended O-notation (previously used in functional analysis) as an essential tool for algorithm analysis. And, his Art of Computer Programming set the standards for the field and is still well worth reading today. So, it seems a little presumptuous for me to analyze one of Knuth's own algorithms. I set out only with the goal of understanding one of his many papers, “Dancing Links,” which concerns a backtracking algorithm for an NP-complete problem, a subject of some interest to me. But, as so often, the problem took over and wouldn't let me go until I'd found something to add to it. Several times I thought I'd reached the end of the analysis, only to discover another refinement that kept it going deeper, until eventually this grew from a blog post to something resembling the outline of a full paper. I imagine Knuth is familiar with this process, on a much larger scale, as his Art of Computer Programming also grew far larger than he originally envisioned. Regardless, here is my analysis.

Exact cover is one of the 21 NP-complete problems in Karp's 1972 “Reducibility Among Combinatorial Problems,” a paper that forms (together with Cook's theorem) the foundation of NP-completeness theory. Knuth describes applications of exact cover in finding polyomino tilings, using sets of the cells that can be covered by each possible placement of each polyomino. The seven exact covers above can be interpreted in this way as the tilings of a \( 2\times 2 \) square by monominos and dominos:

Sudoku puzzles can also be expressed as exact cover problems, in which there is one element for each cell, one element for each combination of a digit and a group of nine cells, and one set for each combination of a digit and a single cell. Another standard combinatorial problem, the eight queens problem, is not quite an exact cover problem directly (the selected queen placements must cover each row and column of a chessboard but only cover 16 of the 30 diagonals) but can be made into one by adding seven additional “virtual pieces” that may each cover two perpendicular diagonals but no rows or columns. If all sets in an exact cover instance have exactly two elements (as for instance, in the eight rooks problem, in which the set representing each rook placement contains a single row and a single column), the problem becomes that of perfect matching, a polynomially-solvable but nontrivial special case.

The algorithmic content of Knuth's paper involves a backtracking algorithm that Knuth calls “Algorithm X,” and some techniques for implementing Algorithm X efficiently using doubly linked lists (where the “dancing links” of the title come in). Algorithm X can be defined very simply, if one skips over such details; it is a recursive search procedure that takes as arguments a set \( U \) of elements and a family \( F \) of subsets of \( U \) and performs the following steps.

Different choices of the “pivot” \( x \) may lead to different running times — for instance, if one can choose a pivot that is not contained in any of the sets, it is preferably to do so, because then the algorithm will immediately backtrack rather than fruitlessly searching unsolvable subproblems. But what can we say more rigorously about the worst case performance of Algorithm X? If \( n \) is the number of sets in the input family, what function \( f(n) \) describes the running time of the algorithm? Because of the way the dancing links implementation reduces the input size of the subproblems in the recursive calls, the time per call at the bottommost levels of the recursion (where most of the work happens) will be constant, so we may equivalently ask how many recursive calls are made.

Algorithm X may easily be modified to find, not just one exact cover, but all of them, so one possible lower bound on its performance is provided by the maximum number of different exact covers in any instance. For instance, an exact cover instance formed from \( k \) disjoint copies of the \( 2\times 2 \)-square example has \( 7^k \) different solutions, formed from \( n=8k \) input sets, so (as a function of \( n \)) the number of exact covers is \( 7^{n/8}\approx  1.27537^n \). Any version of Algorithm X that lists all covers must take at least this much time.

For exact cover itself, one can do better using Knuth's suggestion of choosing a pivot element that is contained in as few sets as possible. Pivots contained in no sets lead to immediate backtracking, and pivots contained in a single set lead to a smaller subproblem with no branching, so we need only worry about pivots contained in two or more sets. Before diving into case analysis, it will be helpful to have a lemma analyzing the sizes of the subproblems the algorithm may encounter.

Using this lemma, we may proceed to analyze cases. In general, each case will lead to a recurrence of the type \( T(n)=\sum T(n-s_i) \), which is solved as \( \kappa^n \) where \( \kappa \) is a root of the function \( 1-\sum\kappa^{-s_i} \). A numerical approximation to \( \kappa \) may easily be found by binary search, or by more sophisticated numerical search procedures, as this function is negative for \( \kappa \) between one and the desired root, and positive for all \( \kappa \) larger than the root. For instance, the graph of the function \( 1-1/\kappa^3-2/\kappa^5 \) shown below (created with Walter Zorn's function grapher) shows how well behaved this function is for \( \mathbf{s}=(3,5,5) \). The overall worst-case behavior of an algorithm of this type can be bounded as the maximum among the solutions of the different recurrences arising from the different cases. We need only determine the minimal vectors \( \mathbf{s} \) allowable by the lemma, search for the roots corresponding to each vector, and choose the maximum value κ among the different roots found by these searches. 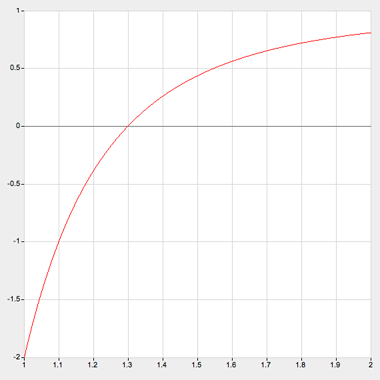 Thus, for Algorithm X, with the pivot rule in which the algorithm chooses \( x \) to be contained in as few sets as possible and using Lemma 1 to bound \( \mathbf{s} \), we have the following cases.

Reducing the instance size without branching

Although Algorithm X already performs well on chains such as the \( (2,3) \) and \( (3,4,5) \) cases discussed above, we can do a little better. In this case, it turns out that the problem size may be reduced for free without doing any branching. However the price for this improvement is that generating all solutions, rather than just a single solution, becomes more awkward.

However, there is a catch. Suppose that we perform this transformation, replacing some \( S_i \) by \( S_i\setminus S_1 \), but suppose also that \( S_i\setminus S_1 \) already exists as a separate set in the family. What do we do? The one-for-one correspondence of solutions of the reduced problem and solutions of the original problem only holds if we allow multiple copies of the same set in our reduced problem, which prevents us from applying Lemma 1. If we only care about finding a single solution, though, there is no problem: simply keep one copy of the duplicate set (it doesn't matter which one). If we are interested in the number of solutions, rather than a list of solutions, we may keep an integer multiplicity on each input set, add together the numbers of duplicate sets, and multiply together the numbers of the sets used in any solution. And if we really wish to list all solutions, we may associate with each set in any reduced instance a list of the larger sets it comes from, so that, once we have found a solution to the reduced problem we may produce from it a list of all corresponding solutions in the original problem.

If a search algorithm for the exact cover problem uses this transformation to reduce the problem size whenever a nest is detected, instead of branching, the worst remaining cases turn out to be those in which \( \mathbf{s} \) is \( (4,4,4) \) or \( (5,5,5,5) \). But in those cases, also, it is possible to simplify the problem without branching, using the following lemma.

Note that, if the problem instance includes a set \( Y \) that intersects every set containing \( x \), as described as one of the possible cases in the statement of the lemma, then \( Y \) cannot be part of any exact cover, as including it in a cover would prevent \( x \) from being covered.

As an example, consider applying Algorithm Y to the example instance we started with, with eight sets, four elements, and seven exact covers. The recursion tree has only one multiway branch, at the outermost level of recursion; each successive call after that leads to an instance of the nesting rule, until the problem reduces to instances with a single set:

The \( 7^{n/8} \) lower bound no longer applies to this algorithm, because different exact covers do not necessarily lead to different leaves of the recursion tree.

As with Algorithm X, we may analyze algorithm Y (with the pivot rule that chooses \( x \) to have as few sets containing it as possible) using the lemmas to bound the vectors \( \mathbf{s} \) of subproblem size reductions. Although the algorithm itself is still relatively simple, its analysis is complex and involves many cases.

Now that our preliminary analysis has identified the \( (3,5,5) \) branch as problematic, let us make one additional refinement to the pivot rule for Algorithm Y. As before, we choose a pivot \( x \) that is covered by as few sets as possible. But, in order to avoid the \( (3,5,5) \) branch, we break ties in choosing the pivot in favor of pivots that do not form this split. That is, if the pivots we may choose among are contained in exactly three sets each, we only choose a \( (3,5,5) \) branch in the situation in which all three-set pivots lead to the same vector of subproblem size reductions.

We may draw a graph in which the vertices are pivots of (3,5,5) branches, and the edges of the graph are sets of \( F \) that contain two such pivots. By the analysis above, this graph has exactly two edges at every vertex; that is, it is a collection of disjoint cycles.

Now, consider what happens once Algorithm Y chooses a pivot within one of these cycles. In the next step, in each of the three recursive calls after the \( (3,5,5) \) branch, the neighboring vertices in the cycle will be covered by exactly two sets of the instance: a singleton set containing only the vertex, and one of the two edges that were in the graph before the pivot was performed. Thus, the Algorithm will proceed to reduce the instance by applying the nesting rule, without performing any more branching. This reduction continues until the entire cycle has been removed from the instance. Thus, for the cost of three recursive calls, the algorithm reduces the problem not only by the three or five sets that it removes at the time of the \( (3,5,5) \) branch, but by the number of sets included in the whole cycle. The worst case occurs for the smallest possible cycle, a triangle, which acts effectively like a \( (6,6,6) \) branch and leads to a recurrence with an \( O(3^{n/6})\approx O(1.20094^n) \) solution, much smaller than those arising from other cases in the algorithm. Thus, we may eliminate the \( (3,5,5) \) branch from our case analysis and consider the other cases instead.

We may draw the following conclusions from our analysis:

What Knuth tribute would be complete without exercises? The parenthesized numbers are my estimate of the difficulty of the problem, on Knuth's familiar scale.